The Definition of to Achieve according to Webster’s concise dictionary is “to accomplish something or to win or attain as by effort or skill” . Yep that applies. At first, I thought earning this Professional Certified Coach (PCC) designation would be easy yet I  can assure you that it wasn’t and for good reason because the International Coach Federation (ICF) expects discipline,  knowledge and the use of core coaching skills. 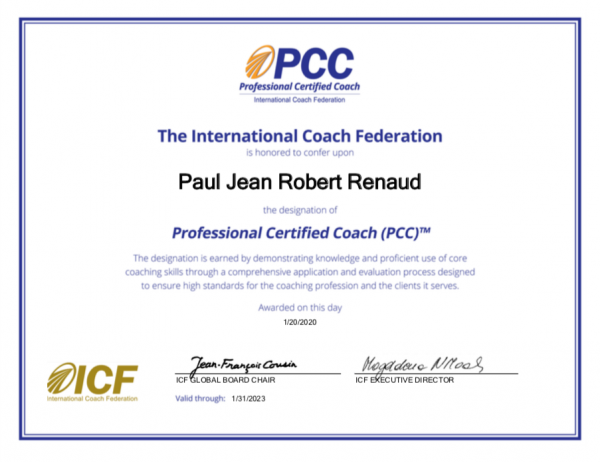 I now know having waited with a great deal of anticipation that earning this title was not a guarantee either.

Rather than bask on my moment, I thought I would share 2 concepts when it comes to achievements given the leaders I have coached and leaders I have observed and met.

Consider the 10,000-hour rule that Malcolm Gladwell elicits in his book titled Outliers. In the book is an intriguing chapter that highlights gifted individuals, be it musicians such as the Beatles and Mozart, athletes and programmers such as Bill Joy, the co-founder of Sun Microsystems, and Bill Gates of Microsoft, who were able to achieve stardom through practice or 10,000 hours of what they liked so much. More importantly, Gladwell adds, “Practice isn’t the thing you do once you’re good. It’s the thing you do that makes you good.”‘[1]

Gladwell explains that the reason the Beatles did so well is not because they would have one-hour play sessions in Liverpool, but rather in Hamburg, Germany where they played in strip clubs for up to 8 hours. On their first trip to Hamburg in 1960 The Beatles played 106 nights for five or more hours per night, and this pace continued till 1962. By the time they were recognized in 1964 the band had performed live an estimated twelve hundred times. “Most bands today don’t perform twelve hundred times in their entire career.”[2]

The Beatles were a prime example of reaching their pinnacle because of the 10,000-hour rule. So, if practice is the thing that makes you good, is that the key to determining if you’re a leader?

Think about yourself now in your profession, job or trade; whether it be advising clients, fixing sinks, flying planes, writing code, operating on patients or management of teams, how many hours have you dedicated to this activity? 1000 hours? 2000 hours? If you’re an airline pilot, that question is easier, since pilots track the number of flying hours. My father had a good friend who was an 18-wheeler truck driver, and he told my dad one day that he was quite proud of having driven 1.5 million miles in Canada.

When you’re leading teams, however, how do you know how many hours of management time you’ve covered? OK, we often refer to how long we’ve worked in business, how long we’ve practiced dentistry or how long we’ve worked in engineering since graduating, but how many hours were attributed to leading people, repairing cavities, writing business plans or presenting in front of boards? The question remains elusive. More importantly, if you believe and agree with Gladwell’s theory of greatness, how does one meet this milestone if one cannot account in a simple way the magic number of 10,000, like a pilot?

Whether they prove 10,000 hours or not, anyone can do amazing things versus their peers, but you gotta put in the time. There are no shortcuts. Stephen Covey said in his book, The 7 Habits of Highly Effective People,that “Many of the great things in the history of our civilization have been achieved by the independent will of a determined soul.”[3]

I’m not sure he was referring to the spiritual concept of us holding a soul, but rather to a determined person.

I like the way Gladwell adds that “Achievement is talent plus preparation. The problem with this view is that the closer psychologists look at the careers of the gifted the smaller the role innate talent seems to play and the bigger the preparation seems to play”[4]

I have not achieved 10,000 hours yet in Coaching, more like 2000 hours but Gladwell has given me the motivation I need to forge on.

This is a real simple concept and let me use Warren Bennis to make a point. He once said:

“Our mythology refuses to catch up with us. And so, we cling to the myth of the Lone Ranger, the romantic idea that great things are usually accomplished by a larger-than-life individual working alone. Despite evidence to the contrary –including the fact that Michelangelo worked with a group of 16 to paint the Sistine Chapel – we still tend to think of achievement in terms of the Great Man or the Great Woman, instead of the great Group.”

The message?  Every time you notice someone achieving something noteworthy, a pinnacle of some sort or greatness remember that this person did not do it alone. There was a team behind him or her to make it possible. It cannot be otherwise and thinking that you become an expert or an authority on your own is a myth. Again, my reading, observing people and following successes of various leader reaffirms to me that there are no exceptions.

In my case, fellow coaches Anda Suta and Ioan Nicut kindly guided me down the PCC path. Then Carly Anderson’s one-on-one mentoring work and guidance was instrumental to making sure I properly develop the core competencies as a professional coach. Carly was diligent and relentless to make sure I meet the “markers”. Adding to this was effective, no nonsense Coach training from Andrew Neitlich. I also to have recognize my staff and clients that helped facilitate my application not to forget my Maria who never wondered about my obsession for doing it right, nor to give up.

There you have it. A team, my team behind the achievement.

I am a Professional Certified Coach (PCC) and the registered member of the International Coach Federation (ICF), and as such I conduct myself in accordance with the ICF Code of Ethics in all coaching interactions.

For details on how to order your Paperback please send me an email at paul@paul-renaud.com

"A great coach teaches you how to outperform. Paul Renaud is a great coach and with his help we were able to see strong results for our Google Partners. Paul provides effective ROI for his coaching services."
Rareș Rusu, Head of Business Finance (France, Italy, Spain, Portugal) at Google

"We hired Paul to come in as Leadership Advisor and Coach. His contributions were effective in helping us optimize the management team. Because of his vast experience, Paul has a keen ability to read people, uncover latent talent and help organizations succeed."
Tim Helsen, CFO Europe at UPS

"We consider Paul Renaud to be a great Coach in the areas of embracing change and peak performance. We appreciated his honest, straightforward ‘can-do’ approach for our team at Bitdefender and his contributions have led to tangible results. We look forward to meeting new milestones with Paul’s help."
Ciprian ISTRATE, VP Consumer Solutions at Bitdefender

"Paul has been a great asset for our Entrepreneurship Workshops. He is one of the most appreciated trainers in all editions, open minded and with a great sense of fun, but also due to his examples: Case studies from Romania and abroad or advice on how to achieve Peak Performance. Last, but not least we learn the power of Networking each time we interact with Paul."
Dragos Dinu, Project Leader @ Ateliere de Antreprenoriat

And here is my list of favorite books with a short summary/reason as to why you should consider them.

You have successfully subscribed to our newsletter.

With over 33 years’ experience under my belt - 15 years as an executive spanning 10 countries I am a Professional Certified Coach (ICF) for any management level.

I'm an energetic communicator and a TEDx Speaker and MC.

For additional details, you can download Paul Renaud bio

I love to Coach people for two reasons:
1) I have identified this as an inherent skill of mine and,
2) I have always been someone who is interested and cared about people.

Like a sports Coach I help my clients maximize their professional potential – either master new responsibilities or aspire to a new career while at the same time finding balance with other equally important aspects of their lives such as their partner, family, social life and spirituality.

My blog is called “I Feel Good” and it deals with Coaching and Peak Performance so I invite you to read it.